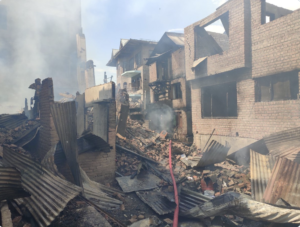 It’s being reported that at least fifteen family homes were damaged or destroyed when the J&K police & CRPF special forces went on a rampage last night in the Nawakadal district of Srinagar. Several heavy artillery blasts were involved in this densely populated area. People report that they lost everything in their homes & could save nothing. One woman reported that the rampaging troops looted & even stole her jewelry.
Stand with Kashmiris & demand the immediate, unconditional withdrawal of all Indian forces from Kashmir.
(Photo of scene via journalist Fahad Shah @pzfahad, posted May 19, 2020)