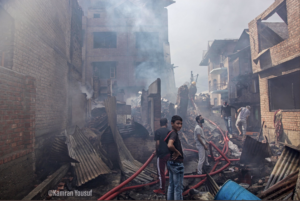 One can be forgiven for thinking this a scene from Gaza, Syria, Iraq, or Yemen. But in fact it is downtown Srinagar in the densely populated district of Nawakadal where early this morning a joint force of J&K police & CRPF special forces used heavy artillery for several hours ostensibly to rout two militants. There appears to be a major escalation of this kind of destruction by the occupying army in Kashmir at a time of mandated quarantine during a deadly pandemic. Like Israel against Palestinians, India is using the pandemic to advance colonization & genocide against Kashmiris.
It has never been more urgent to defend Kashmiris by demanding the immediate, unconditional withdrawal of all Indian forces from Kashmir.
(Photos by Kamran Yousuf, posted May 19, 2020)