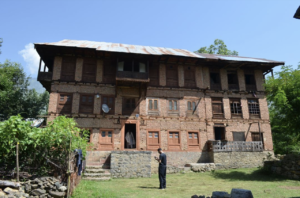 “The House Of Resistance

This is my mom’s home in Kashmir. It is located in the beautiful city of Bandipora, in a small village called Onagam. Her house is on a hill known as “Pir Both”, overlooking Kashmir. It’s quite picturesque and can make anyone fall in love instantly.

However, this house has it’s tragic tales to tell. Once upon a time, this house was bustling with voices and people. Now, it is ghostly, with the walls of the house slowly crumbling. Everything in the house that remains was purchased in the late 80s/early 90s. The last time this house was filled with voices of love, laughter, and happiness was at my mom’s wedding in 1987.

My family has always been vocal about injustice since the beginning of the fight for azaadi which originates in 1931. This has cost them serious trauma that can’t ever be healed. My family has voiced for peace, helped minorities in their community that felt threatened, and demanded that the voices of the people of Kashmir be heard.

In return, the young boys of my family were tortured, beaten, arrested, and detained. In some cases, even after 30 years they are unable to live healthy lives as the torture is physical, mental, and emotional which they are unable to overcome.

Then there are my cousins whom I only know through my mom’s wedding album. My mom speaks of one of her nephews, she says she thought for 10 years that one day she’d hear some news of him, but alas hope dies a tragic death. It was the hardest pill to swallow, knowing someone you love so much would never return nor could you find out what happened to them. I scroll through my mom’s wedding album, and can’t help but notice his beautiful smile and the life that was taken away from him, from us.

Then there were the boys we buried with our own hands, and to this day the pain never left us. The void can never be compensated for.

My mom’s elder brother has spent countless years in jail being tortured, eventually having to flee in very scary measures. My mamujaan is a teacher, a writer, and a freedom fighter. He has written many books on Kashmir. He speaks about the torture and the pain of being forced out of his land 30 years ago as a result of Indian terrorism. His last interrogation was in 1990, when he was booked under PSA (Public Safety Act) at interrogation center Harinawas, Srinagar. This traumatic interrogation which is still seen in Kashmir has roots in the early 80s. Despite all this, my mamu still wanted to continue talking about Kashmir and the injustice, and he took the step to leave his land. He didn’t want to spend his years in jail, he wanted to tell the world about what Kashmiris are facing, and that we don’t have a voice. After his unfortunate departure in 1990, he didn’t see his family or unborn daughter till 1999.

With my mamujaan leaving Kashmir in 1990, the Indian army kept terrorizing our house and took away my mamu’s only teenage son in to custody under PSA and brutally tortured him at Kotbalwal, Jammu. To this day, he is unable to speak of the torture as it is traumatic to even having to relive that reality. He was forced to flee Kashmir in 1995 as his life was threatened.

Following that, the harassment from the Indian army did not stop, with 4 daughters and no male in the household, the Indian army constantly harassing them, the womenfolk had no choice but to leave in 1999.

My grandmother refused to leave, she reiterated till the day she died that she would hold the doors open of this house for it’s children. She went on to live the last 10 years of her life all alone. Everyday for 10 years, she would first put out her son’s plate for lunch/dinner and would wail “kanh doh aasay suteh yelih beh sherrih yettih Farooq sabas batteh” ~ “will there ever be a day when I’m able to feed Farooq (her only son) at home.” Our neighbours would tell us how she would hold the plate of her son dreaming of the day she would be reunited with him, including a few hours before her death. This was a routine for her, even though nobody was there, she would talk to her son, and would make sure all his things are kept the same way as when he left.

On the day of her death, one of our relatives was visiting her and she said that I’ve heard there is a statement that all those displaced from Kashmir in 1990s are allowed to return. My cousin laughed and said, “you’re dreaming.” My grandmother was indeed dreaming, a few hours after this conversation she passed away. She couldn’t imagine having to lock the doors to her house, she couldn’t imagine that she’d be separated from her son till death.

In an unspoken way, we accepted my mamu and his family wouldn’t be able to return, nor did we ever speak of it.

Today, there is a man that still lives in this house. He was brought as a kid in the 60s to help out around the house. He spent his whole life caring for people of this house. After my grandmothers death, we thought he would leave and a lock would be placed on the doors. Rather, he has spent the last 13 years all alone, waiting for his children to return. When I show him pictures of my cousins, he holds them and wails. He says he could never leave and as long as he is alive the doors to his house will be open, and it’s children will be welcomed back home. Knowing what each one of us likes, he makes sure to prepare it, and when we come home, the love in his eyes and the pain is both a testament to what he has witnessed. Every time I visit, I feel like my grandmother is there with us. If only, for a minute.

We are all a witness.