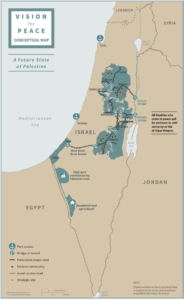 This is a map of Trump’s so-called ‘peace plan’ which he tweeted a few hours ago. It is first & foremost a scam, a temporizing maneuver to give Israel more time to fully implement the Oslo Accords which embody the terms of Palestinian surrender & legitimize occupation & expropriation. The map itself stands as testimony to that reality. There is no possibility of a two-state/bantustate solution for Palestinians. The only alternative to continued ethnic cleansing & genocide is the secular, democratic state proposed decades ago by Palestinian visionaries. That is the only solution which incorporates Palestinian self-determination while addressing the fate of Jews born & raised in Palestine.

There may be Israeli settlers in the West Bank unwilling to accept a secular, democratic state because of their rabid Zionism. No one ever thought a transition from colonial acquisition, apartheid, genocide would go smoothly. Settlers who cannot accept democracy may be compelled from persecuting & freeloading off Palestinians to move back to where they came from. It took a civil war to end slavery in the US but the alternative was no more acceptable than continued genocide against Palestinians.