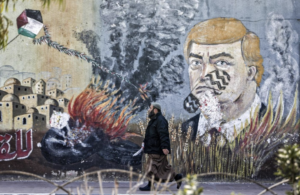 Palestinians don’t need to read the Trump regime’s entire 80-page ‘peace proposal’ to know it’s a scam & an electoral snow job. It is not a ‘historic milestone’, as Israeli leaders are calling it, but a commitment to accelerate the ethnic cleansing of Palestinians in the West Bank & genocide against Palestinians in Gaza. It is an update of the Oslo Accords which formulated the conditions of Palestinian surrender & legitimized occupation & expropriation.

What is disturbing is that at a time of accelerated genocide, there is so little action in defense of Palestinians because of divisions over Syria in Palestinian solidarity & energy taken from organizing forums & rallies given to campaigning for Bernie Sanders. Election years always take a toll on independent political action as ‘lesser evil’ advocates chase down the candidate they see as savior. But this declaration of genocide by the Trump regime requires we think outside the electoral box to stand with Palestinians at a critical time in their struggle for self-determination. Not just self-determination, but survival against snipers, bombs, wholesale expulsion from their lands & the demolition of their villages.

This photo is a mural in Gaza City of Trump with a footprint stamped on his face to show what Palestinians think of his ‘peace plan’.