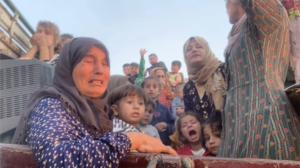 CNN reports that thousands of Kurdish, Arab, & Assyrian civilians are fleeing the border towns in turmoil after the Turkish ground invasion & heavy airstrikes. They report the streets are choked with people fleeing in a panic, six to seven people piled on motorcycles, stuffing belongings & mattresses in cars. With Idlib to the west under Syrian & Russian bombardment, there is no place for them to run.

Stand with the Kurds. Demand the immediate, unconditional withdrawal of all foreign military forces & mercenaries from Syria.

(Photo from Western Kurdistan from several sources on Twitter)