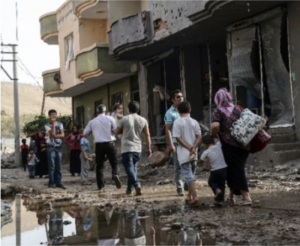 When the Kurdish leadership, in the struggle for Kurdish self-determination, operated opportunistically in maneuvers between the US-coalition & the Assad dictatorship instead of standing with the Syrian Arab Spring, sharp criticism was required. But when they come under military attack by Turkish ground forces & bombers, we brush all that criticism aside to stand with Kurdish civilians against genocide. That should not have to be explained to those with an elementary sense of human decency. Only Stalinists & Assadists who support war, occupation, & genocide are incapable of understanding that elementary principle of human solidarity & are gloating.