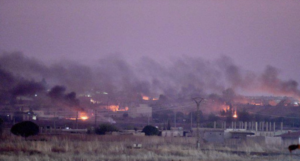 Turkey & its supporters are calling ‘Operation Peace Spring’ against the Kurds a fight against terrorism. Erdogan tweeted: “Operation Peace Spring will neutralize terror threats against Turkey & lead to the establishment of a safe zone, facilitating the return of Syrian refugees to their homes. We will preserve Syria’s territorial integrity & liberate local communities from terrorists.” That is exactly what Syria, Russian, Iranian, & US-coalition forces claim to justify carpet bombing of civilians. It’s ‘war on terror’ stuff combined with anti-Semitic claims that the Kurds are trying to create another Israel in Syria.

At this point in time, if you support the bombing of Idlib & the Turkish slaughter of Kurds, you are on the side of barbarism, war, & genocide. The only principled demand is for the immediate, unconditional withdrawal of all foreign military forces & mercenaries from Syria. Those who continue to call for US military intervention to assist the Kurds only demonstrate that they are incapable of learning from experience.