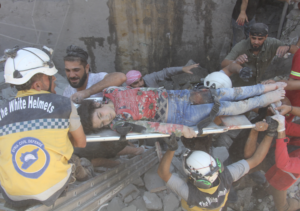 According to the White Helmet rescue workers, since the Syrian & Russian bombing offensive began on Idlib, Hama, & Aleppo on April 26th, 830 civilians, including 199 children, have been killed. Since the regime is targeting civilians, not terrorists, there is no report on the number of ‘al-Qaeda affiliated Salafi-jihadi terrorists” killed, if any. Media has shown precious little interest in reporting either the deaths of civilians or of terrorists–if they even know how to identify terrorists from freedom fighters.

Propagandist Eva Bartlett has written & reposted her RT rubbish several times about how White Helmets use children for propaganda purposes. Alas poor Eva has only been in politics for a few years & entered them as a professional propagandist for Assad based on her associations with demented anti-Semite David Icke. She has no political history as an independent activist, especially in antiwar politics. Her interests are solely in supporting the status quo of power & not the struggles of working people against injustice, inequality, & dictatorship. So she might not know, although she is masterful at lying through her ass, that photojournalists often focus on women & children because that is the most compelling way to tell the story of war, occupation, & genocide.

This photo is not a made-for-propaganda moment. It is White Helmets recovering & trying to save the life of a little girl buried by Syrian or Russian bombing of civilian neighborhoods, market places, farm fields in Idlib. If the White Helmets publish this photo, it is not to peddle lies against the Assad dictatorship but to show the character of the regime bombing offensive against civilians.