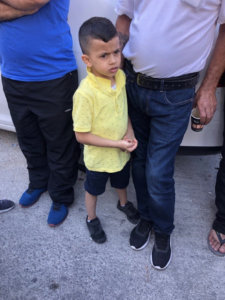 Israeli military authorities summoned three-year-old Mohammad Rabee Alayan in for interrogation about stone pelting police & military jeeps in the West Bank town where he lives. There have been hundreds of Palestinians in the West Bank shot down or assaulted by settlers & occupying forces & thousands in Gaza bombed or shot at by Israeli snipers. And Israel dragged a little kid just out of diapers in for interrogation on stone pelting?