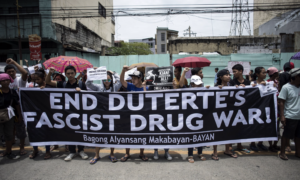 When Duterte took office as president of the Philippines on June 30th, 2016, he vowed to eradicate drug addiction. Even those who have followed the so-called ‘war on drugs’ in the US involving racist hysteria about ‘narco-terrorist Black youth gangs’ & martial law in the Black community were aghast at the vigilante violence of Duterte’s campaign. Using police & vigilantes, the homicidal campaign did not target drug traffickers so much as the urban poor who the government has been attempting to forcibly remove from slums for years. Images of the young victims bound with duct tape & left like road kill on the public streets traumatize all who view them.

In the first eight months of the campaign, a Filipino newspaper kept track of those extrajudicially executed, including how many & their names. By February 2017, the number executed had reached 11,000–over 1,000 victims every month. For some reason, the newspaper then stopped keeping an account. It’s possible the numbers became overwhelming but more likely they were threatened by the regime. Now there are only guesstimates of the death toll since the Duterte regime maintains its vigilante war under close wraps. Some media with sloppy reporting claim about 5,000 have been murdered in the past three years. Al Jazeera estimates–based on what we do not know–as high as 20,000. There are also tens of thousands of poor people who turned themselves in for imprisonment hoping to escape the death squads. They remain imprisoned in squalid overcrowded prisons under Auschwitz conditions.

The UN Human Rights Council (UNHCR) has denounced, sometimes more like chided, the Duterte regime for the death squads but has never taken decisive action. However, on July 4th the UNHCR voted to investigate the human rights situation in the Philippines. Eighteen members of the UNHCR voted to approve the investigation, 14 voted against (Angola, Bahrain, Cameroon, China, Cuba, Egypt, Eritrea, Hungary, India, Iraq, Philippines, Qatar, Saudi Arabia, Somalia), & 15 countries abstained from voting. Most of the countries that voted against the investigation are also signatories to the letter endorsing China’s genocide of Uyghur Muslims. If Cuba & China are so damn revolutionary, we’d like an explanation for why they continue to side with the most reactionary forces in world politics, including Duterte, Assad, Putin.

Drug addiction is a mass problem everywhere but murdering poor people & desecrating their bodies is not the way to cope with what is a public health & social issue. Part of any thorough, respectable UNHCR investigation should necessarily, though it will not, include the sources of drug trafficking to the Philippines & elsewhere, especially the trafficking of methamphetamines & other drugs from Burma & China & any involvement by the CIA which has been historically up to its eyeballs in drug production, processing, & trafficking in Southeast Asia.

This photo is Filipino protesters at a funeral march for 17-year-old student Kian Delos Santos who was killed by police during an anti-drug raid in Manila. One of the remarkable things about Filipinos is their fearless protests against US militarism & against Duterte’s war on the urban poor despite the danger it places them in.