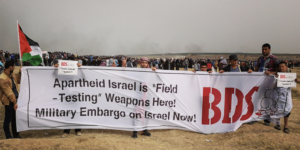 The NY Times, one of the leading voices of American Zionism, came out this week with two major articles about BDS written by ‘liberal Zionists’. A liberal Zionist is one who supports a Jewish-only state & a bantustate solution for Palestinians but is squeamish about the most violent aspects of Israeli colonialism like occupation & outright genocide. Like Bernie Sanders, who typifies that point of view, they focus criticism on Netanyahu & distinguish him from the apartheid policies that are the very nature of Zionist Israel.

The article on July 27th, written by David M. Halbfinger, Michael Wines & Steven Erlanger (Erlanger was NY Times bureau chief in Jerusalem; Halbfinger presently holds that position) is titled “Is BDS Anti-Semitic? A Closer Look at the Boycott Israel Campaign” & was republished on July 28th under the title “A Look at the International Drive to Boycott Israel.” On July 29th, the Times published an article by Eric Alterman, a Zionist columnist for the liberal journal The Nation, titled “Does Anyone Take the BDS Movement Seriously?” Using the restrained language of liberal Zionists rather than the rabid vituperations of right-wing Zionists, the authors of “Is BDS Anti-Semitic” do a sophisticated smear job on the political forces behind BDS, attempting to associate it with terrorism & even snidely with anti-Semitic vandalism clearly identified by police authorities as coming from nationalists of the fascist sort, not from BDS activists. Mostly, the authors attempt to disparage the impact of BDS in the US. Alterman also tries to disparage the impact of BDS, saying with undisguised disdain, “Like vegetarian diets & carbon-neutral living, it has become something that is vital to espouse, but much less important to explain, let alone carry out.”

But why, if BDS is so ineffectual, did the authors of “Is BDS Anti-Semitic” enumerate the mountains of legislation in the US attempting to outlaw it, including the US House resolution last week condemning it because it will delegitimize Israel & undermine support for a bantustate solution? Why didn’t they discuss the hundreds of attempts by Zionists on US campuses to ban BDS activism? And of course, they only talk about the US, not the hundreds of Zionist initiatives around the world attempting to outlaw BDS.

Actually, Israel doesn’t need BDS to delegitimize it. Apartheid, colonialism, massive demolitions of whole villages & expropriations of Palestinians lands, genocidal bombing of Gaza, Israeli snipers shooting down unarmed protesters at the Great Return March are more than enough to expose the Zionist state for what it is: a death trap for Palestinians & Jews. As for undermining that bantustate solution? Behind the chimera of a two-state solution, the Oslo Accords, which legitimize occupation, expropriation, ethnic cleansing, speak for themselves. As Israeli journalist Gideon Levy, once a supporter of bantustates for Palestinians, pointed out so cogently a few weeks ago, the two-state solution was never a serious proposal by Israel but only a stalling tactic & political maneuver.

If BDS is so ineffectual, why have 28 US states passed legislation restricting or banning individuals & companies from boycotting Israel if they have state contracts? Only eight US states have not already introduced anti-BDS legislation or resolutions. Why are Zionists willing to trash the Bill of Rights in order to make it impossible to criticize Israel, let alone boycott it if BDS is as harmless as vegetarianism or carbon-neutral living? Why are professors being fired, BDS panels being banned & even litigated against if it’s just a way for anti-Semites to discredit poor little righteous Israel?

Photo is from the one-year anniversary of the Great Return March on March 30, 2019. Palestinians in Gaza appeal to the world to defend them against genocide by building BDS.