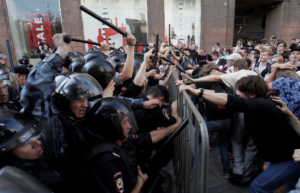 There really needs to be an analysis of the integration of sectarian socialist groups into Stalinism & their convergence with fascism & Assadism. You can’t tell any of them apart these days. True to form for Stalinism, Assadism, & fascism, they are denouncing the protests of thousands in Moscow against government corruption & the Putin regime’s attempts to manipulate municipal elections by removing all opposition candidates.

Photo is from the protest in Moscow last Saturday where police are assaulting protesters demanding free & fair elections & ballot status for opposition candidates.