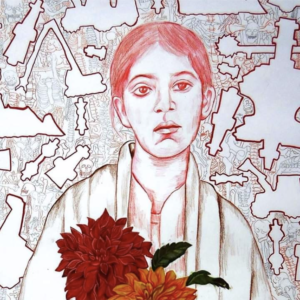 A work done in 2015 titled “Theater of War” by Rollie Mukherjee protesting land grabs & killing by Israel in Gaza. It shows the stencil cut of different tools used for demolishing homes & underneath the skeletons of Palestinians. The young girl & flowers symbolize the fragility of human life, especially of the children targeted by Israel, in combat against the forces of oppression, which in Gaza means the embargo & continuous carpet bombing.