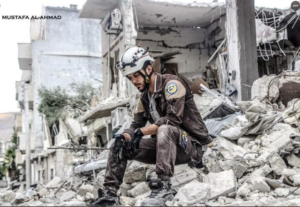 A White Helmet rescue worker after early morning bombing by Russian war planes on the city of Jisr al-Shughour: the British TV network Channel 4 video documented how Syrian & Russian war planes are targeting White Helmets & ambulances in double tap strikes in Idlib although they have been using that tactic since the siege of Aleppo in 2016. In the attack on Jisr al-Shughour, a hospital & essential medical equipment were damaged.

A double tap strike is a military tactic launching two successive strikes against the same target. The first strike is to damage or destroy the ambulance & the second is to injure or kill medics & other first responders. Assadist propagandists & their guppy cult denounce the White Helmets as “al-Qaeda affiliated Salafi-jihadi terrorists” & we won’t ask them to explain how bombing ambulances fits into that scenario. They’ll just blow another Islamophobic justification out their ass. At this point they’re beyond hope.

End the bombing of Idlib. All foreign military forces & mercenaries out of Syria.