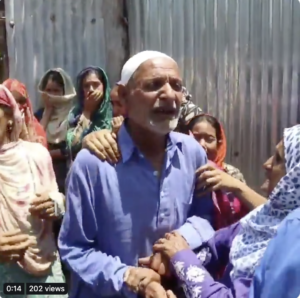 A Kashmiri man cries & is consoled by friends & neighbors after the occupying Indian army destroyed his family home in a hunt to kill operation in Gund village, North Kashmir. Why it was necessary to destroy his home is part of the strategy of occupation & not because he was harboring militants. It functions somewhat differently than the occupying Israeli army in the West Bank which razes homes & entire villages for purposes of ethnic cleansing. But it remains a weapon of occupation, intended to demoralize & punish resistance.
End the occupation of Kashmir. Self-determination for Kashmir.