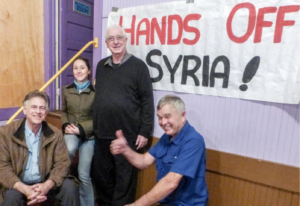 Socialist Action (SA), a cult around the figure of a blowhard named Jeff Mackler, has just announced his candidacy for US president 2020. In the 2016 elections, I endorsed all the other socialist candidates running, not seeing them as competition but, despite our differences, on the same side. But I will not be endorsing this loser in 2020 since he is instrumental in the corruption of the US antiwar movement into an Assadist guppy cult which supports Syrian & Russian bombing of civilians. He’s the political schmuck who toured fascist propagandist Eva Bartlett as an “independent journalist” & coined the aberration calling for self-determination for the Assad dictatorship.

Let me tell tales out of school: I once attended an SA national convention where Mackler was scheduled to give a 1-1/2 hour presentation on Venezuela. He blithered on for 1-1/2 hours without notes & then had the undisciplined temerity to ask for a 1-1/2 hour extension to blither on some more. That extra 1-1/2 hour was subtracted from time allotted for membership discussion. Not a peep of objection from his cult because in a cult kissing the ass of the grand Poobah is the norm. Another time, I was speaking to him on the phone for several minutes when he informed me he had to be quick since Hugo Chávez, then alive & president of Venezuela, was on hold to consult with him about Venezuelan politics. Really!? You want that kind of corrupt blowhard to represent socialism?

(Photo of Bartlett with Mackler (standing) & two other Assadists, February 2017, from SA newspaper)