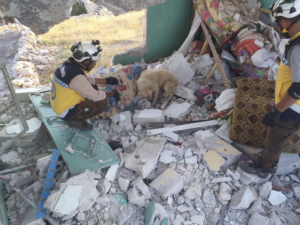 Assad propagandists & their guppy cultists will ridicule the photos of White Helmet rescue workers dealing with abandoned cats, dogs, birds, chickens, livestock, & other wild animals. They’ll mock them as staged & the animals as “crisis actors” like they do the photos of children & adults injured & killed by Syrian & Russian bombers. But since they don’t deny that Syria & Russia are bombing Idlib, in fact applaud it as the apocalypse for ‘Salafi-jihadi terrorism’ in Syria, it’s hard to deny that animals are suffering unimaginably. Any animal lover can tell you that dogs, cats, & other animals freak during thunder storms, firecracker displays, planes flying overhead. They’re as traumatized as small children by the noise & so much more traumatized by bombs, explosives, shrapnel, incendiary weapons, being buried in rubble, being abandoned by dead or fleeing caretakers.

So let the Assadists mock these photos so they can continue to makes asses of themselves & expose themselves as apologists for dictatorship, even at the expense of animals & small children.