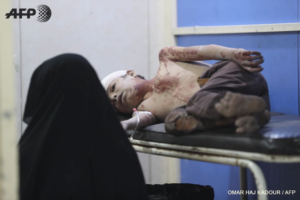 A little boy in hospital after being injured in the murderous Syrian & Russian bombing attack last Saturday on Kafriya town, Idlib province: we’re waiting to hear which faction of ‘Salafi-jihadi terrorists’ Assad authorities will claim the little guy belonged to or maybe even commanded.

For so long, many of us held out hope that corrupted activists in the antiwar movement, now become a pro-war cult, would be roused to their senses by the overwhelming proof presented in the savage carpet bombing of Idlib. But in fact, they’ve dug in their heels & ignore or deny the war crimes so evident. There is no hope nor a future for them though the ‘dogs will go on with their doggy lives’ pretending they have the same political stature as before. When you lay down with flea-bitten dogs, you get up with fleas. When you march lockstep with fascists in support of dictatorship against democracy, you march yourself straight into oblivion.