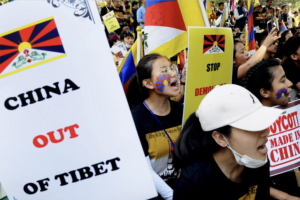 Michael Parenti is a retired academic & well-known political writer. He has ridiculed the idea that Stalinism remains a political current in world politics & claims it died with the collapse of the Soviet Union in 1991. This blind spot of his might reflect that he’s never been an activist & has never had to confront Stalinists in political activity to understand that as an ideology & political methodology it is alive & strong & is now morphing toward fascism. Or it might reflect that he himself shares some of the orientation of Stalinism.

In 2007, he published a persuasive & influential article titled “Friendly Feudalism: The Tibet Myth” which is a defense of China’s 1950 military occupation of Tibet. It is a masterpiece of Stalinist political methodology which justifies occupation as a way for Chinese communism to free Tibetans from feudalism. You will never get me to defend feudal economic, social, or political relations but it’s not up to me & it wasn’t up to the Chinese government to change Tibetan society by force. Marching in an army, violently taking over a country, repressing the population, & forcing people to flee has been proven completely disastrous over & over again in improving humane & democratic relations, just as it has proven in Tibet.

In their defense of China by denying the Uyghur genocide, maligning the Hong Kong protesters as stooges of nefarious western forces, & denying the massacre at Tiananmen Square, Assadists are now including defense of China’s occupation of Tibet. Just because some of the ‘free Tibet’ movement are half-baked celebrities or that the Dalai Lama plays ball with reactionary governments does not negate the demands of Tibetan resistance that wants China to get the hell out of Tibet. The issue is self-determination & that’s a right the oppressed have whether Stalinists & their apologists like it or not.
It isn’t that Parenti does not accurately describe the problems of feudal society but that he believes military force is the way to change things. Tibetans are completely removed as an agency acting on their own behalf & having the right to control their own lives.

A study in Stalinist methodology: http://michaelparenti.org/Tibet.html

Photo is Tibetans living in exile in India take part in a protest against China in March 2019 on the annual Tibetan Uprising Day commemorating the 1959 uprising against Chinese rule.