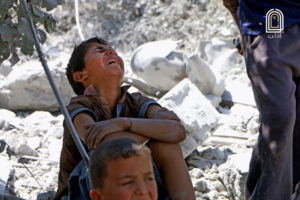 A little boy in Idlib is overwhelmed with grief & trauma after weeks of Syrian & Russian carpet bombing. The Assad dictatorship, its paid propagandists, & guppy cultists insist that all civilians left Idlib months, even years, ago & those being bombed are only “al-Qaeda affiliated Salafi-jihadi terrorists.” You could only write such an Islamophobic ‘war on terror’ script for a science fiction film because it makes not an iota of sense in political reality & contradicts overwhelming documentation.

That Bartlett & Beeley peddle this crap makes sense since they’re paid well by Syria & Russia to do so. That Chomsky, Pilger, Fisk, Tariq Ali, Cockburn, Prashad, & others peddle this crap is a symptom of their political corruption & irrelevancy. That the Assadists & Stalinists who’ve run the antiwar movement into the ground & made it a deranged cult peddle this crap is a declaration of their betrayal of principles.

The only principled stand is to demand the cessation of bombing in Idlib & the immediate, unconditional withdrawal of all foreign military forces & mercenaries from Syria.