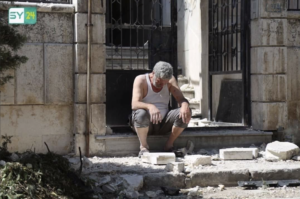 An older man in Idlib is overwhelmed by nearly three months of Syrian & Russian carpet bombing, including with barrel bombs & incendiary weapons. The Assad dictatorship, its propagandists, & guppy cultists call him an “al-Qaeda affiliated Salafi-jihadi terrorist” for rising up against dictatorship to build a society fit for human beings to live & love in.

(Photo from Sy24 via journalist Asaad Hanna on Twitter)