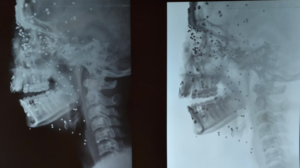 This is an X-ray taken at the ICU hospital in Srinagar in July, 2016 of 14-year-old Insha Malik, the little girl who was inside her family home when Indian soldiers bombarded her with pellet munitions. Media followed little Insha, the secondary brain infection she got from lead pellets, the extreme pain she endured, the trauma to herself & her family. She is a studious girl who wanted to be a doctor when she grew up but now will have to revisit all her dreams. According to doctors, she has zero chances of regaining her vision in either eye.

End the use of pellet guns in Kashmir. End the occupation. Self-determination for Kashmir.