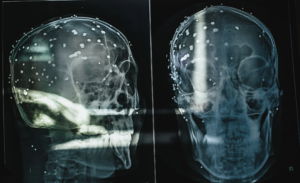 This is the head X-ray of 24-year-old Danish Rajab who was pummeled with pellet munitions in July 2016 as he sat chatting with friends in a tea stall near his home. Pellet guns fire more than 500 sharp lead pellets at high velocity. Even a single pellet entering the eye at high speed can cause serious & irreversible damage. At least 100 pellets are still lodged in his eyes, face, & head & doctors say the procedure to remove them would put his life at grave risk. He can feel the pellets when he touches his head.

At the time of his injuries, Danish worked for a company in Srinagar selling dairy products. The pellet munitions did so much damage that his left eye had to be removed entirely & he can only see faint shadows from his right eye. He’s still a young guy, only 27-years-old today, & India has no social security protections. His father cannot provide for him since he lost his own job as a laborer due to health problems. Danish of course had a very difficult time coming to terms with his disability & isolated himself. His family & friends are all affected by his demoralization.

End the use of pellet guns in Kashmir. End the occupation. Self-determination for Kashmir.