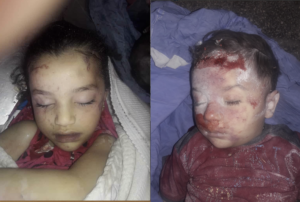 Will Assad propagandists claim that these children killed by Syrian & Russian bombing in the siege of Idlib, Hama, & Aleppo are ‘jihadi terrorists’? Can they identify for us which terrorist cells they belonged to? Will they brush off this documentation of Syrian & Russian war crimes by calling these children “crisis actors” trained to play dead on demand, as they did in Ghouta, Aleppo, & elsewhere? Will erstwhile socialists & progressives continue to betray every political principle by trailing after Assad’s coterie of Leni Riefenstahls & denouncing the White Helmets as terrorists engaged in organ trafficking? Have they no shame left but to align with fascists against the Syrian Arab Spring uprising & cause the deaths of hundreds of thousands of civilians?