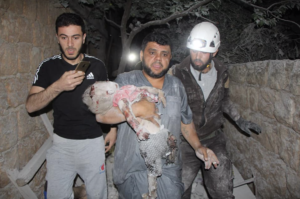 So whilst Assad propagandists denounce them as organ traffickers, the White Helmets continue to risk their lives rescuing people from the rubble of the murderous Syrian & Russian bombing siege of the Idlib, Hama, & Aleppo provinces. Just hours ago, White Helmet rescuers responded to bombing in 39 towns & villages targeted by 75 bombing strikes, 43 explosive barrel bombs, & at least 565 shells & missiles.

Assadists claim Syria & Russia are only bombing ‘jihadi terrorists’ but they don’t explain why nearly a quarter of a million civilians have been forcibly displaced, how bombers engaged in carpet bombing can miss hundreds of thousands of civilians, or why family homes, markets, schools, hospitals, & farm fields are being bombed to take out terrorists. To documentation of civilian deaths, like this photo, Assadists shout “crisis actors” & erstwhile socialists & progressives drool in admiration for the ‘independent journalism’ of Bartlett & Beeley, the Leni Riefenstahls of the Assad dictatorship.

All along, the only principled demands are the immediate cessation of Syrian, Russian, & US-coalition bombing in Syria & the immediate, unconditional withdrawal of all foreign military forces from Syria.