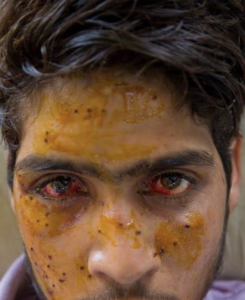 There are so many photos of pellet gun victims that show the abject savagery of using such a weapon against human beings or other animals, for that matter. Many of the protesters pummeled with pellets are working class kids unable to afford the extensive surgery & rehabilitation required so they’re forced to live with lead pellets embedded in their internal organs, with the disfigurement involved, with lifelong pain & health problems, with disability like partial or full blindness. They suffer life-changing injuries.

This photo is then 16-year-old Mohammad Imran Parray injured in the massive protests which erupted all over Kashmir in July 2016 after the killing of Burhan Wani. His injuries, at least to his eyes, do not appear to be as severe as many others sustain but it must be very difficult emotionally for a young guy to live with facial & bodily disfigurement–especially when you consider what young people go through just over pimples. What’s powerful about this picture is how it captures the melancholy of a young guy now forced to live with lead pellets embedded in his tissues, some of which cannot be extracted, & with self-consciousness about the injuries.

It’s come to a time when human rights supporters around the world have to respond to the use of pellet guns against Kashmiris. We have to think out the political & organizational forms required to internationally oppose pellet munitions as well as ways to help finance the working class kids who need surgery & rehab services. Such solidarity could have a considerable impact by educating about the character of the Kashmiri freedom struggle & the barbaric character of the military occupation.