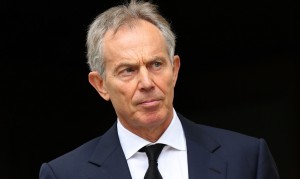 Tony Blair, described so aptly as “a gassy eruption stinking of farts & sulphur,” has moved from special envoy for the Middle East Quartet (The UN, US, EU, & Russia), interfering against democracy in the Middle East, to a new position chairing the European Council on Tolerance & Reconciliation dealing with antisemitism.

Despite his cowardly & sniveling demeanor he must be held in high esteem by the international oligarchy–likely not for any political creativity but for his more greasy qualities–those indefinable somethings that make him so repulsive. If he worked in a factory, he’d soon have to face the music of his repugnancy & would only be able to survive through his talents of toadyism.

Why anyone would put a hapless character like Blair to deal with the rising incidents of antisemitism in Europe is only a mystery if you believe the European Council on Tolerance & Reconciliation actually deals with xenophobia & antisemitism. If in fact it deals with xenophobia, why doesn’t it incorporate the even greater increase of violence against Muslims, including governmental restrictions?

In fact, the council is a right-wing Zionist group embedded in the highest levels of international Zionism, allied with Israel, & with US & EU neoliberal plans for the Middle East. What that sniveling ‘eruption of stinking farts & sulphur’ will be doing is coordinating campaigns to disrupt BDS & discredit & smear Palestinian solidarity as antisemitic. Really, it will be quite a seamless transition from what he did in the Middle East as envoy for the ME Quartet.

Many cannot resist the temptation to spit or hurl when they see his image. It leaves a toxic miasma wherever it’s posted, requiring exorcism. Feel free to perform one by hurling horse manure at his photo. Regrettably, as we continue to build the economic, cultural, & academic boycott of Israel, we will be running up against this decaying wretch who feeds off human suffering. Let Palestinian solidarity be the movement that buries him.