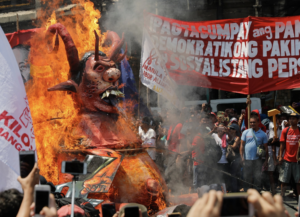 May Day in Manila, Philippines: Filipino protesters have long been among the most impressive in the world with their burning effigies & unrelenting opposition to US military operations in their country. In one notable instance, protesters grabbed a water cannon & turned it back on riot police. Despite political repression, they have stood ground in protesting Duterte’s vigilante death squad war against the urban poor. Here they are burning an effigy mocking Duterte & demanding an increase in the minimum wage, expanded maternity leave, & passage by the Filipino congress of a security of tenure bill which would regularize work for 20 million workers now forced to operate in the unstable situation of contractual employees.