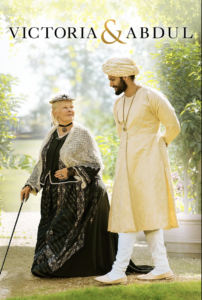 Whoever is behind making the film “Victoria & Abdul” should be hunted down, lined up against a wall, & pummeled with horse manure. It is a deplorable glorification of the British moochocracy, a whitewash of British colonialism in India, & a paean to toadyism on the part of Indian social climbers. It’s about the real-life friendship of an elderly cantankerous Victoria with an Indian servant who began ingratiating & inveighling himself into her affections by kissing her feet. It’s a creepy relationship because it’s rooted in inequality. Abdul is a young Indian Uncle Tom sucking up to a lonely, tyrannical octogenarian. It may have been a platonic relationship but it was certainly racist & libidinal in a deeply repressed way. Trying to find any beauty in this film is akin to those who try to find an inspiring love affair between Thomas Jefferson & his slave mistress Sally Hemings. The only redeeming thing about the movie, other than Judi Dench’s ability to portray an unpleasant imperious old woman, is Abdul’s fellow Indian servant Mohammed who expresses rebellion against British colonialism & abhorrence at Abdul groveling his way up the “stinky, creaking ladder of the shitty British Empire.”