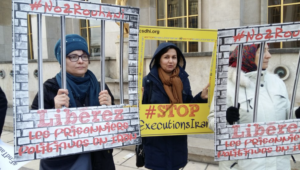 Apparently, some are lauding Iran’s flogging & secret execution of two 17-year-old cousins arrested when they were 15 on multiple rape charges. Rape is an odious & violent crime & our visceral response is to beat the crap out of the accused & hang them. But courts of law exist precisely to determine actual guilt & restrain vengeance from stooping to barbarism. According to Iranian rape law which is stacked against women, accused rapists can only be convicted on the testimony of multiple witnesses (four Muslim male witnesses or a greater number of male & female witnesses). Amnesty claims Mehdi Sohrabifar & Amin Sedaghat were found guilty in an ‘unfair trial’ but do not elaborate how the trial failed to meet standards of due process. Iranian authorities did not specify the method of execution but Iran commonly uses shooting, hanging, or stoning to death. There is no humane way to execute someone but hanging or stoning are certainly among the most barbaric. What is known is that when the boys were transferred from a juvenile detention center to a prison on April 24th, neither the boys nor their parents were informed that they were to be executed the next day. The families only learned they were executed when authorities gave them the bodies which had marks from being flogged.

A fundamental issue here is that use of the death penalty for those under 18 is strictly prohibited under international human rights law & is a violation of children’s rights. Ninety-seven children under the age of 18 were executed in Iran between 1990 & 2018. Between 85 & 90 children remain on death row in Iran. Iran has become the top executioner of children in the world despite being a party to the Convention on the Rights of the Child & the International Covenant on Civil & Political Rights which make Iran legally bound to treat anyone under the age of 18 as a child & ensure they are not subject to the death penalty or life imprisonment.

Beside failing children, the Iranian regime has failed to combat the epidemic of violence against women. Legislation to criminalize gender-based violence was approved by the Rouhani administration in May 2017 but Iran’s chief justice refuses to sign off on the bill. Women’s rights activists say stalling is a temporizing tactic to eventually eliminate provisions that expanded the definition of violence to include emotional abuse & restrictions on a women’s freedom of movement. Iranian law deters rape victims from reporting their assault because rape victims can face prosecution for adultery (punishable by execution), “indecency,” or “immoral behavior.” Marital rape is legal. Domestic violence is not a crime & criminal penalties for murder as a result of domestic violence or honor killings are lighter than penalties for other acts of murder. Under Iranian law, girls may be legally married at 13-years-old (compared to 15 for boys) or even younger if their fathers or grandfathers & a judge consent. There are over 40,000 registered marriages of children in Iran, including over 300 girls under the age of 14, with increasing numbers of girls married under the age of ten.

Kangaroo courts & the disturbing arbitrary character in which Iranian laws are administered regarding women make it possible for political dissidents to be accused of rape & given the death sentence. But in June 2018, the gang rape of 41 women & girls in Iranshahr province was covered up by the regime because some of the perpetrators had ties to Iranian security forces. Activists who tried to publicize that case on social media were harassed & arrested.