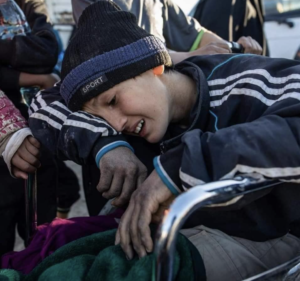 This bereft child is in al-Khol refugee camp in northwest Syria near the Iraq border. The camp was set up in 1991 during the Gulf War to provide shelter for refugees from Iraq. It was reopened after the 2003 US invasion of Iraq to provide shelter mostly for Palestinian refugees fleeing persecution by the US-installed Iraqi government. During the counterrevolution against the Syrian Arab Spring, it has grown to 65,000 refugees including Iraqis & Syrians fleeing ISIS-controlled areas. Much of the media is reporting the new refugees as wives & children of ISIS fighters but the overwhelming majority are civilians without association to ISIS fleeing the bombing.

Russian & Iranian media, & of course Assad propagandists are reporting that Kurdish forces control al-Khol camp under the supervision of US advisers & that Kurdish forces are subjecting refugees to extreme violence & deprivation making it more like a concentration camp than a refugee asylum. That’s probably true but it is also not one whit different than refugee camps all over the region as a result of the war against the Arab Spring uprising. The unspeakable horrors faced by refugees, including ongoing war, starvation, no medical care, freezing temperatures without adequate shelter (many new arrivals have to sleep in the open), are the direct fault of Syrian regime, Russian, Iranian, Kurdish, & US-coalition forces. The death rate among children is sky-high (from disease, starvation, dehydration, & hypothermia) & according to one NGO, most children show signs of acute psychological distress, including nervousness, withdrawal, aggression, nightmares & bedwetting.

Assad propagandists & their guppies in the corrupted antiwar movement call this state of affairs a liberation from ‘Islamist terrorists’. This is more aptly called war & human rights crimes on an industrial scale. Some even call it genocide & few could argue with that. The only principled demands are for the immediate cessation of bombing by Syrian, Russian, & US-coalition forces & for the immediate, unconditional withdrawal of all foreign military forces from Syria.