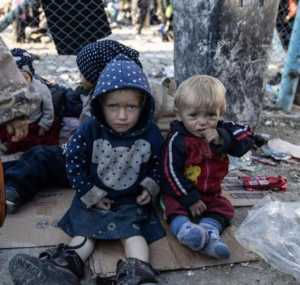 These children are war refugees in the al-Khol camp in northwest Syria near the Iraq border. Media has been reporting that most of the refugees in that camp are the wives & children of of ISIS fighters who fled intensified US-coalition bombing in the ISIS-controlled region of Baghuz. According to some reports, of the 65,000 residents in the squalid camp, only 500 families have ISIS associations. The rest are civilians who also fled US-coalition bombing.

This is the camp where reportedly Shamima Begum lives. She is the British teenager who went to Syria in 2015 to marry an ISIS fighter & was recently stripped of British citizenship when she asked to return home with her children. When her infant son was among those children who died in the camp, a British tabloid referred to him as a “jihadi baby.” There is no such thing as a ‘jihadi baby’. Whatever their parents’ politics, these are children who have as much right to human rights as any other child–if not in practice, at least by international law. Using Muslim-hating as a way to vilify them & justify barbaric conditions is about as low as Muslim-hating can go.