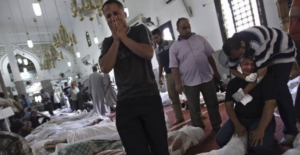 The situation in Venezuela has some significant affinities not just with militarization against the Syrian Arab Spring uprising but with the military ouster of Egyptian president Mohamed Morsi in 2013 after one year in office. It’s one of the most misunderstood events in the entirety of the Egyptian Arab Spring & very much to the point of what’s happening in Venezuela.

Those who fetishize elections apparently didn’t follow the military-controlled electoral process leading to Morsi’s election in June 2012. (He was “elected” in the same way Mubarak & Assad were–through fraudulent one-party elections.) Nor did they observe that Morsi functioned as the civilian front office for the military after Generals Hosni Mubarak & Omar Suleiman were ousted. After weeks of massive protests in Tahrir Square, the military junta threw out Mubarak & dispensed with Suleiman but retained control & continued violently attacking protesters. The fatal mistake was trusting the generals or at least not pushing through to dismantle the military which was/is bankrolled by the US in exchange for selling out Palestinians.

Morsi was an elite member of the Muslim Brotherhood (MB). The MB played a passive, though not a counterrevolutionary role throughout the revolution but became extremely aggressive after Morsi was elected, including using violence against anti-Morsi & anti-military protesters. Under Morsi, a new Egyptian constitution was formulated which left the military in complete control & denied democratic & human rights to civilians. Arab Spring protests against the new constitution & austerity programs continued while the military junta worked with the MB leadership & incited MB members to attack the Arab Spring protests.

On June 30, 2013, the one-year anniversary of Morsi’s ‘election’, an estimated 32 million Egyptians marched across the country calling for Morsi to step down because he did not present the political program Arab Spring protesters had in mind when they demanded the ouster of Mubarak. (Many contest those crowd estimates but if it were even one-quarter of 32 million, it would still be one of the most momentous political events in human history.) In order to protect itself & neutralize the protests, the military junta stepped in (as they had with Mubarak) & ousted Morsi. Mubarak & Morsi’s ouster in a ‘coup’ was how the military took advantage of a revolution with very weak, compromised leadership. General Sisi & the junta bounced Morsi & openly took over Egypt because the revolution was too massive. They no longer could control it with a civilian front but required wholesale, murderous repression.

After Morsi’s ouster, the military junta that collaborated with elite MB leadership & incited MB thugs to attack Arab Spring protesters began a military onslaught against the MB protesters. The army mowed them down by the hundreds in bloodbaths where bodies were piled on bodies. They massacred working class MB members to intimidate & behead the revolution & to protect military rule. Regardless of MB conduct against the revolution, defending them against massacres by the Sisi regime was not just the humane, moral, & democratic thing to do but it was imperative for defense of the Egyptian revolution.

Using hysteria about “Islamists,” a media propaganda campaign ensued to justify the massacres of the MB. Many erstwhile progressives who claim to stand for democracy fell for the hysteria & supported the massacres. Justifying the massacres of MB members set the stage for defense of the Assad dictatorship in Syria. Media beat the drums of Islamophobia while cynics used the carnage to document their conviction that social transformation is impossible against the mighty fortress of US & Egyptian militarism. Committed human rights supporters did not wait for the tear gas & horror to dissipate before examining with the most careful attention how counterrevolution gained the upper hand in Egypt. Trust in the generals, comparable to trust in the Assad regime, is chief among the problems.

Regime change is an insufficient program for social transformation; the military that runs Egypt must eventually be forcibly challenged & dismantled down to the last bullet & tear gas canister. The Maduro regime may not be a dictatorship but it is massively repressive & committed to the wrong class. It must also eventually be replaced–but by Venezuelan working people, not by the US Pentagon. A full program that addresses the political, social, & economic problems of working people must be developed as an alternative to the generals & tyrants.

This 2013 photo is grieving family & friends of massacred Muslim Brotherhood members who have come to a mosque to identify their loved ones bodies. May they Rest In Peace.