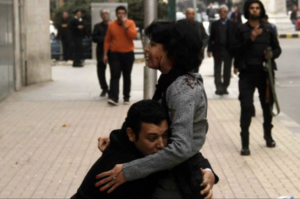 Today is the seventh anniversary of the titanic Arab Spring uprisings which all began about this time in 2011, including in Tunisia, Egypt, Yemen, Bahrain, Syria, with reverberations in Jordan, Iraq, Morocco, Libya. We should take a moment to pay tribute to the millions of Arab peoples, men, women, & children, who rose up against brutal & repressive regimes to demand human & democratic rights & who have paid such a heavy price. Hundreds of thousands, closer to millions, of people have been murdered, disappeared, incarcerated, tortured, bombed, starved to death. If we want to understand why Islam has become so demonized & maligned, it is because most of those uprisings were in countries with a Muslim majority. Hating on Muslims is a way to justify bombing their countries while at the same time arming the regimes to destroy working people’s dreams of freedom.

This is a photo of Shaimaa al-Sabbagh, a 33-year-old socialist activist in Egypt who on January 24, 2015 was marching with a small group to Tahir Square in Cairo to lay a wreath in tribute to the thousands of activists killed in the 2011 uprising. Masked riot police blasted the group with tear gas & pellet guns shooting Sabbagh in the back of the head, neck, & side of her face. She died almost instantly from shotgun pellets to the heart & lungs. She has since become a symbol of continuing opposition to Egypt’s military junta. Her courage stands as a testimony to the power & the future of the Egyptian Arab Spring uprising. May all who died Rest In Peace. It is the mission of our generations to make sure they did not die in vain.

This photo is the moment Shaimaa was shot. The man holding her is Sayyid Abu el-Ela, a personal & political friend.