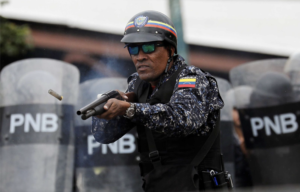 For those supporting the attempted coup by Juan Guaido (& thus US military intervention) in Venezuela by saying Guaido is a social democrat whose political party belongs to the Socialist International: let me do your homework (or is it your thinking?) for you since it’s not clear whether you’re too lazy to do your own study, are just indifferent to reality, or are politically corrupt. Whatever it is, as we know from Syria, it can be contagious.

Putting aside Joseph Stalin, responsible for the murder of millions (among other monstrous crimes); the Chinese communist government engaged in genocide against the Uyghur Muslims (among other monstrous crimes); Bashar al Assad who heads the Arab Socialist Ba’ath Party of Syria & is responsible for using gas & barrel bombs against unarmed civilians (among other monstrous crimes), keep in mind that the political party of Hosni Mubarak, who the Egyptian Arab Spring uprising threw out of power in 2011, was a member of the Socialist International. So is the party of Aung San Suu Kyi. And in fact Suu Kyi remains a Special Honorary President of the Socialist International despite being stripped of several honorifics for orchestrating genocide against the Rohingya people.

So if you’re just a war monger & think there is such an idiotic thing as a US humanitarian invasion, please don’t camouflage that in socialist hogwash. Be true to yourself & just do rah-rah for war against Venezuela. We already know what a dope you are.

This photo is a Venezuelan National Police officer firing rubber bullets at anti-government protesters in Caracas. It should be said loud & clear that Maduro has no more right to fire on unarmed protesters than Syria has to drop barrel bombs on civilians or the US to invade Venezuela.
(Photo by Manaure Quintero/Reuters)