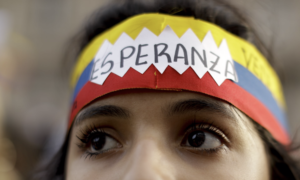 When the Trump regime announced the US is recognizing politician Juan Guaido as president of Venezuela over Nicolas Maduro who was reelected & inaugurated & when US diplomats refuse to leave Venezuela despite being expelled, the US is setting Venezuela up for a military intervention. We should question the democratic character of the Venezuelan elections. We should acknowledge that the hundreds of thousands of Venezuelans protesting against Maduro’s policies have just cause & are not fascist or rightwing, as Stalinists, libertarians, Assadists claim. But the US is threatening military action only because the Maduro government has switched its economic & political nexus from the US/IMF to Russia & China. That fundamental shift where the US is losing political control to Russia & China is going on all over the world.

Just as Iran, Russia, & the US coalition grabbed the political advantage by militarizing opposition to the Syrian popular uprising against the Assad regime, the US is wresting political victory from the threat presented by the Venezuelan popular uprising against Maduro’s austerity policies (worsened by US sanctions). The mortal threat to all these governments is popular democratic movements. No matter the rhetoric or competing interests, on that they all agree. In the case of Syria, the Assad regime was weakened, Syria was fractured, & most importantly, the Syrian Arab Spring uprising was crushed. The US is not threatening to intervene in Venezuela because Maduro is repressive, even though he is massively so. They have no trouble working with Saudi Mohammed bin Salman, Brazilian Bolsonaro, Filipino Duterte, Israeli Netanyahu, Indian Modi, & other such thugs. They are intervening to force Venezuelan capital to again become dependent on US capital rather than Russia & China. It’s the oil fields, stupid! It’s a pitched battle for political control over all of Latin America.

When we hit the streets around the world–as we must–with placards demanding “US hands off Venezuela,” we are not defending the Maduro regime or its policies. We are defending the Venezuelan people from the barbarisms sure to follow any US military intervention. There are thousands protesting against the Maduro regime because of its repressions & austerity but they do not necessarily support Juan Guaido or want him to replace Maduro. They certainly do not, in their majority (there are always agents provocateurs) support US military intervention. The international antiwar movement cannot make the same unprincipled, treacherous mistakes it is making by supporting the Assad regime against the Syrian revolution. It must take a clear stand with the civilians of Venezuela & let them sort out their differences with Maduro.
US hands off Venezuela!