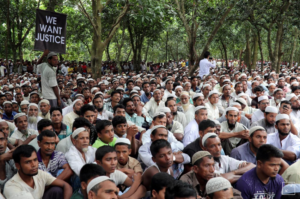 The first group of Rohingya refugees to be voluntarily repatriated back to Arakan state in Burma are scheduled to depart on Thursday, November 15th. There is a list of 2,000 who were selected for this so-called voluntary sojourn but to date not a single person has volunteered. If the whole damn thing is so voluntary why would Burma & Bangladesh even devise such a list? Voluntary means putting it up for grabs & waiting for volunteers to step forward. They report that most of those on the list have not been informed lest that create panic among refugees. If they think ‘voluntary repatriation’ would cause panic, why in the hell would they even consider such a warped plan? There can be no decisions made about who, when, or where without the direct participation of the Rohingya refugees themselves & they aren’t going back without ironclad protections against the resumption of the final solution by the Burmese genocidaires.

Reportedly, the refugees are so distressed at the possibility of being forced to return to the killing fields of Burma that many are having panic attacks, threatening suicide, going sleepless, & many are setting sea for Malaysia in rickety boats to avoid such an eventuality. Bangladesh is also still planning the deportation of 25,000 refugees to an uninhabitable island in the middle of nowhere where they would live in barracks just like the concentration camps built by China & India in Arakan state.

The Rohingya have made their demands perfectly clear in repeated protests & through their spokespersons: they will not return without safety & protective measures in place. It must be our commitment to stand with them in their struggle for justice.

Photo is a protest at the Kutupalong refugee camp in Cox’s Bazar on August 25, 2018.