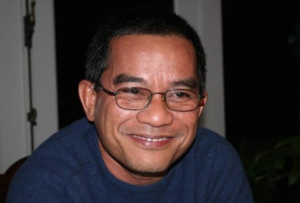 We should take a moment to honor the life & work of Benjamin Ramos, a 56-year-old Filipino human rights lawyer gunned down on November 6th as he was leaving his office in Kabankalan City, in the province of Negros Occidental. He was a founding member & secretary general of the Negros chapter of National Union of Peoples’ Lawyers (NUPL), an association of pro bono lawyers formed in September 2007 to defend the human rights of poor, marginalized, & persecuted Filipinos–farmers, workers, fishers, women, urban slum dwellers, students & youth, indigenous peoples, Moro Muslims, political activists. After Duterte’s drug war against urban slum dwellers began in July 2016, NUPL lawyers also defended the families of victims. In a statement about his death, NUPL said Ramos was “the run-to pro-bono lawyer of peasants, environmentalists, activists, political prisoners & mass organizations in Negros.”

It isn’t certain if Ramos defended any victims of Duterte’s war against the poor since most families are reluctant to file legal claims because of retaliation by police death squads & vigilantes & because the majority of victims are slum dwellers in the Manila metropolitan area. Just recently he took on the “Sagay 9” case of nine farmers, including four women & two teens, who were members of the National Federation of Sugar Workers in Negros. On October 20th, during an occupation-type protest on a sugarcane plantation in Sagay City, they were massacred by about forty men using M-16 rifles. Three of the dead workers were then doused with gasoline & burned. A fact-finding delegation of human rights groups pointed to a private paramilitary group associated with the Armed Forces of the Philippines that works with plantation owners as the most likely perpetrators of the massacre.

The National Federation of Sugar Workers reports that 172 farmers, peasants & land rights activists–45 in Negros alone–have been killed during Duterte’s two years & 4 months in office. But the conflict over land reform between plantation owners, small farmers & landless farm workers goes back to the Spanish & American colonial eras. A land reform law (CARP) went into effect in 1988 after a mass uprising but was soon outmaneuvered & preempted by neoliberal agribusiness policies forcing hundreds of thousands of dispossessed farmers & rural workers into urban slums. Militarization of the countryside was required during which hundreds of farmers were killed. During the 2001-2010 presidency of Gloria Arroyo, it was estimated that between January 2001 when she took office & September 2006, over 703 farmers & organizers were assassinated in extra-judicial killings. NUPL was formed in response.

From 2001 to 2016, through Arroyo’s tenure & that of Benigno Aquino III, at least 114 lawyers were also killed, including judges, prosecutors, & practicing lawyers. In the first 2 years & 4 months of Duterte’s tenure, 36 lawyers have been assassinated. In an August 2017 speech, Duterte told national police not to be intimidated by human rights lawyers investigating the deaths of what he called drug addicts & dealers. He said, “If they are obstructing justice, you shoot them.” The so-called war on drugs is really a war on the urban poor because accelerated neoliberal urban policies now require the displacement of slums which take up hundreds of acres of prime real estate in Manila.

Extra-judicial killings in the Philippines have been a problem since at least 1965 under the dictatorship of Ferdinand Marcos. Duterte, like Trump, appears to operate like a loose cannon but he is on a continuum of repressive politics in the Philippines. At this point in time, in conjunction with the rise of rightwing politicians around the world, a section of the capitalist ruling elite must consider greater repression & violence to be a more effective way to rule. Under Duterte’s tenure–as under Trump, Modi, Bolsonaro, Putin, Assad, Xi, & others–vigilantism is emboldened & legitimized. In the Philippines, not just lawyers & farm workers, but journalists, environmentalists, human rights activists have been arrested or assassinated. The many courageous Filipinos who stand up to protest such repression & violence are vilified as terrorists & underground communists, just as Ramos was after he took on the Sagay 9 case.

May Benjamin Ramos Rest In Peace after a courageous & honorable life & may he be remembered around the world as one of the best of humanity. May the Filipino people rise up & settle scores with political repression & violence once & for all to create a society worthy of their children.