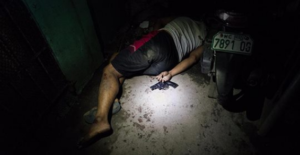 There’s been considerable confusion about the number of urban poor working people killed by police death squads & vigilantes in Duterte’s so-called war on drugs. Ostensibly, it’s a no due process war on drug users & dealers. In reality, it’s a monstrous plan to forcibly clear out the massive urban slums to make way for neoliberal gentrification like upscale shopping malls, condos, resorts, golf courses. The slums were created by rural farm workers, landless peasants, dispossessed farmers who were forcibly, militarily evicted by neoliberal agribusiness policies in the countryside. The different presidential regimes have been trying to burn them & bulldoze them down but now must consider that a too slow process since slum residents have no place to go & simply rebuild after the latest conflagration.

Duterte, who as a psychopath represents the policies of neoliberal capitalism–i.e., capitalism in its barbaric phase–began this war on the urban poor on July 1st, 2016, the day after his inauguration as president. His national police & paramilitary vigilantes killed people at the rate of 1,000 per month according to statistics released by the police. Filipino media reported on the deaths daily, including listing the names of those killed. But then in February of 2017, with over 11,000 reported dead, media became silent & though Duterte continued to threaten a continuation of the death squads, it appeared he had at least temporarily stopped the carnage. It was difficult, if not impossible, to know what was going on. Media & human rights groups began reporting widely disparate statistics–from 4,000 killed to over 23,000. None seemed disturbed by the disparity even when they conflicted with the statistics from the Filipino national police.

This is a very valuable article by the German news service Deutsche Welle which showed some curiosity about the problematic disparities & about whether Duterte was continuing through with his murderous threats against the poor:

Just like the international news blackouts on refugees, wars, occupations, genocides, the Duterte regime is deliberately hiding & misrepresenting extra-judicial killings to prevent the development of international solidarity & it is denouncing any reports to the contrary as fake news.

There have been massive protests in Manila & elsewhere by religious, student, political, & human rights groups demanding Duterte stop the killings. We must stand with them by demanding the end of our own government’s complicity in these heinous crimes against Filipino working people.

eye-crossed-out
This Photo May Show Violent or Graphic Content