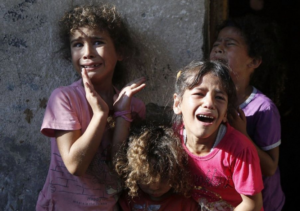 What a rousing concession speech congressman Beto O’Rourke made to Ted Cruz in the Texas senatorial race. He’s a real man of the people & “so f**king proud” that Texas voters gave that Cruz a run for his money because now O’Rourke has become an A-list player in US politics & can confidently put his hat forward as a Democratic presidential candidate in 2020. Even though he lost the senate seat, it’s a win-win situation for our giant among the toadies who make up the Democratic Party.

There’s just one peccadillo in O’Rourke’s rhetoric (because let’s face it, political candidates are mostly all hot air) that should give pause: his ‘proud’ commitment to Israel & his opposition to BDS. We could review his voting record which is consistently for military aid to Israel; his associations with the Zionist lobby groups AIPAC & J Street; his ardent proclamations of support to Israel & just as ardent opposition to BDS. But let us just cite him in 2015 after J Street toured him around Israel only months after the seven-week Israeli bombing siege of Gaza in 2014. Speaking to members of an El Paso synagogue about that siege, O’Rourke “spoke of the fear described by Jews he met who lived at ground zero of the rocket & terrorist tunnel attacks” from Gaza. Does he mean the Israelis in the hills of Sderot who sat night after night in easy chairs sucking down beers, cheering & waving the Israeli flag while they watched the bombing & annihilation of Gaza?

The 2014 operation which Israel called Operation Protective Edge is called a ‘war waged on Gaza’s children’ by several human rights groups & the UN. In seven weeks of carpet bombing, 2,220 Palestinians were killed, 547 of them were children; 11,100 Palestinians were wounded, including 3,374 children, 2,088 women, & 410 elderly people; 1,500 children were orphaned & 1,000 were permanently disabled. Five Israeli civilians, including one child were killed. Judging from these statistics, O’Rourke’s support for Israel isn’t such a peccadillo after all but a fatal political flaw, whether from bad judgement, ignorance, or most likely in O’Rourke’s case, from opportunism & bad character. If there is any quality that does not bode well in politics, it is opportunism which is the willingness to sell your soul (if you even have one) for personal aggrandizement. Or in O’Rourke’s case, the willingness to support apartheid, racism, colonialism, genocide to gain a seat in the US Senate.

Why does his support for Israel & opposition to Palestinian justice matter to voters in Texas or in the US? The most imperative & compelling response is that Israel, with US support, is engaged in a genocide against the Palestinian people. So what, some may respond, when he can do so much for Texans as a senator or for Americans if he becomes president? Do men & women of good will really want social security, Medicare, food stamps to be based on support, or at least turning our backs, on a genocide? Are Palestinian lives of so little matter? Are they not human beings too? If O’Rourke is willing to turn his back on genocide, what makes us think he will not put the screws to us if it serves his career better in his climb to the presidency? Opportunism is like that; it has no loyalty, no principles. So if voting for military aid to Israel means cutting food stamps or social security, what will our man of the people do?

Zionism is a pernicious ideology with a corrupting stranglehold on American politics. It impacts women’s rights, immigration & refugee rights, civil liberties, civil rights, reproductive rights, Islamophobia, war, occupation, genocide, film, literature, journalism. That assertion can be demonstrated over & over again in practical politics going back 70 years. Zionism, which is rightwing, racist, colonialist, must be politically challenged as one of the greatest impediments to social justice in US domestic & international politics. Beto O’Rourke is part of the problem in US politics & no part of the solution.

This photo is Palestinian children attending the funeral of the four little boys bombed to death on a Gaza beach in July during the 2014 bombing siege. They’re probably not “so f**king proud” of Texas voters.