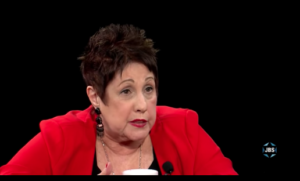 Recently, Phyllis Chesler has been cited in several articles & in a TV documentary as an authority on Second Wave feminism–probably because she just published a gossipy autobiography. She is indeed a well-known feminist thanks to her talent for self-promotion & social climbing. She once wrote unreadable books about women’s psychology, always exaggerates her place in feminist history, & now writes volume after volume of hateful scurrilous screeds against Palestinians & Islam–in one piece calling Palestinian supporters & BDS activists “brownshirts.” In hatred & deceit & to align feminists with Israeli apartheid, she has proven indefatigable. What most distinguishes our girl is her preoccupation with her own superiority–a superiority highlighted by contrast to her contempt for the rest of women, her admiration for lowlifes like Brett Kavanaugh & her close association with Alan Dershowitz.

Those who would like to test their adrenalin levels can google her for articles on Islam but be advised you do so at your own peril. When it comes to lies, insults, abuse, malice, Ayaan Hirsi Ali has her beat hands down. From unreadable she has progressed to rabid Zionist, petulant & mean & has become one of us whom she calls “mean girls.”

(Screensho of Chesler on video where she explains how superior & politically incorrect she is–by which she means willing to spew hatred toward Muslims without the slightest bow to human decency.)