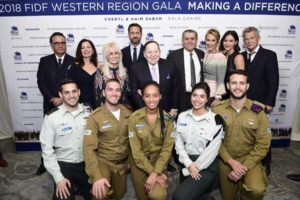 Friends of the Israeli Defense Forces (FIDF) held its annual fundraising event in Los Angeles ostensibly to raise money for the Israeli army (IOF) which is already bankrolled up the yin yang by the US Pentagon to the tune of $38 billion over the next ten years. All of it to be used against the Palestinians who are an unarmed people. All of it to be used for genocide, for the snipers shooting unarmed protesters & bombing civilians. The IOF has no need to cry poor-mouth for its veterans when it also has a multi-billion defense industry selling weapons to Burma & India for use against the Rohingyas & Kashmiris.

This FIDF gala put on by billionaire Zionists Sheldon Adelson & Haim Saban is really a public relations political event to involve celebrities in supporting Israel. All sorts of singers & movie stars attend including Arnold Schwarzenegger, singers Gene Simmons & Seal, Helen Mirren & this year Fran Drescher, Pharrell Williams, Ashton Kutcher, Katherine McPhee, David Foster, Andy Garcia, Gerard Butler, & a couple retired athletes. Is there a single one among those who anyone looks to for political guidance? The last time anyone heard a peep out of Andy Garcia was in 2000 when he tried to get 6-year-old Elián González kidnapped by rightwing relatives in Florida from his father in Cuba.

This year Pharrell Williams was the featured performer. Mr. “Happy” taps is particularly detestable since in 2015 he was scheduled to perform in Tel Aviv & South Africa. The BDS movement informed him about the cultural boycott & prevailed on him to honor it. He performed first in Cape Town where hundreds of Palestinian supporters greeted him with protests. He then cancelled Tel Aviv & many hoped he was taking a step back to assess the situation. He has had three years to smarten up about the character of Israeli genocide but instead he performed at this years FIDF gala which celebrates soldiers who shoot at, bomb, & forcibly dispossess Palestinians.

Before he sang, Williams offered condolences to the Pittsburgh synagogue but remained silent on the wholesale slaughter of Palestinians by the IOF. He closed the program with a performance of “Happy” but earlier in the week had sent a cease & desist letter to Trump demanding he not play “Happy” at any of his rallies after it was played at a Trump rally in Indiana on the day of the synagogue massacre. There will never be an occasion when Williams will have to send such a letter to Palestinian solidarity events since we include him & that damn song in the cultural boycott of Israel for genocide against the Palestinian people. He can shove that Happy crap where the sun don’t shine.