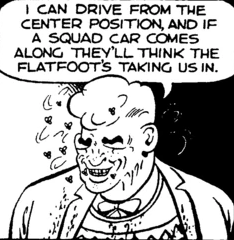 Since my dogs go in & out all day to pee, the door is constantly open & the house swarms with flies. They aren’t the smartest or swiftest little creatures on the planet so it’s easy to swat them where they gather in the windows. But they were beginning to engulf my head in herds, not unlike the villainous character Flyface in the old Dick Tracy comic strip. So against my sense of fair play in the fight against insects, I bought a box of fly ribbons, those sticky things you suspend near a window to attract & kill them. Seemed almost cruel even though I hate the damn pests.

Karma is a bitch. In two days, only one fly has gone near the ribbons. But I have glued my head to the window twice, been wrapped in that damn ribbon repeatedly, & am covered in gummy crap. The flies have won.