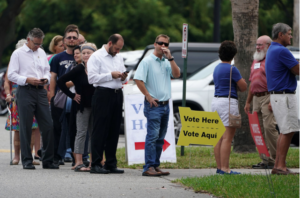 There is considerably more jubilation over US election results internationally–especially the election of 100 women, including Muslim, Native American, & a Palestinian women–than there is among the estimated 40-60% of US eligible voters who don’t bother to vote because they haven’t discerned a modicum of difference between the two parties in several decades. Rhetorical differences between the two parties certainly exist but no meaningful policy differences. Regardless of their intentions, those women will not change the character of the Democratic Party (DP). On the contrary, that party will change them, especially on the issues of war, occupation, genocide, immigration, Palestine. If they do not toe the line, DP officials will make it impossible for them to function.

The DP is a capitalist party in a two-party system with an electoral system rigged top to bottom against third party opposition. It is not really a membership organization so much as it is an electoral apparatus. If you want to see how little democratic control its members have, one only has to attend a precinct caucus which are stage-managed events without any political power or say-so over the program of the DP. But it isn’t just its electoral fraudulence as the party of the underdog that is of concern. More important is how the DP functions outside the electoral arena where it plays a central role in managing & controlling progressive forces, primarily by undercutting independent action & massive popular social movements. Most shamefully, it functioned to neutralize & demobilize the US civil rights movement. Similarly in the women’s movement of the 1970s, there was a wrenching political conflict between those who wanted an independent movement & those like Gloria Steinem who wanted it subordinated to the Democratic Party. That subordination is central to why there is so little consistent opposition to the attacks on the Black, Latino, & Native American communities or to the attacks on women’s reproductive rights. The DP also functions to neutralize immigration rights groups by providing them millions in foundation grant hush money so that they actively prevent a mass movement from developing.

If some want to vote for the DP in what they see a do or die election, that’s their right. We should all actively oppose the mass disenfranchisement & gerrymandering of Black, Latino, & Native American voters who traditionally vote for the DP. But to chide the 40-60% of American non-voters for white privilege or indifference is misanthropy & misunderstanding. If they thought voting made a difference in their lives, they would be chock-a-block at the polls.