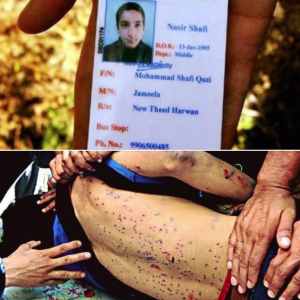 This is an 11-year-old Kashmiri boy named Nasir Qazi who died from pellet gun injuries on September 17, 2016 during the uprising against the assassination of B. Wani, the man whose funeral prayers were attended by 600,000 Kashmiris but whose name or photo cannot be posted on FB without a suspension. Deaths & injuries are such a constant in Kashmir & Palestine, as well as in the several war & genocide zones, that it is impossible to honor them all individually or imagine the grief their families & friends endure. We should take a moment to honor them all for their contributions to the cause of human freedom. They were the very best of humanity inspiring & emboldening young & old alike. May they Rest In Peace as we carry on their work.