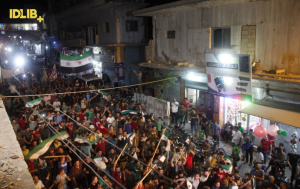 This is an evening protest in Benesh in the countryside of Idlib province against Syrian, Russian, & Iranian ground & air bombardment. These massive protests show fearless resistance to the Assad dictatorship despite carpet bombing & despite monumental betrayal by the corrupted antiwar movement. They resonate with the Arab Spring protests across Syria which began in 2011 & with the Yemeni Arab Spring uprising where millions continue to protest despite three & one-half years of US & UK-backed Saudi coalition bombing.

Stop the bombing. Demand the immediate, unconditional withdrawal of all foreign military forces from Syria.

(Photo tweeted by Idlib Plus)