“Farooq Abdullah – once lost in power that extended from New Delhi – threatened a religious congregation with the rape of their women and the destruction of their property at the Hazratbal Shrine. The incident happened in 1993. If you think anyone of them will open their eyes, then you have been bewitched. One day my #free_Kashmir will prosecute every one of them and I will make sure to be present at the hearing. I hope he lives to see that. I pray for his long life too because I have to be present at his trial. We are and we shall be. LONG LIVE KASHMIR.” 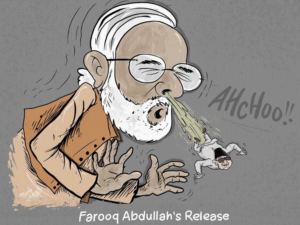 It’s impossible for Kashmiris to read reports about the coronavirus quarantines & not make invidious comparison to their ordeal under involuntary lockdown. They are as charmed as the rest of us by Italians singing from their balconies but they also remember that when they were locked in & out of communication with each other & the rest of the world, all they heard were Indian Army loudspeakers. It’s a trauma that will last until the last Indian soldier has been booted from Kashmir.

Modi threatened to go off social media but he’s on Twitter today dishing out coronavirus guidelines from the Ministry of Health. After the medical catastrophe he caused in Kashmir because of the nearly eight-month lockdown, who the hell is he to talk about health when Kashmir is not that ‘integral’ when it comes to healthcare!? 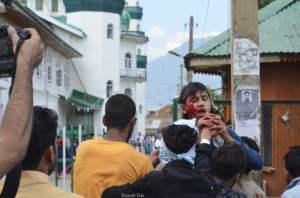 When the total lockdown of Kashmir first began in August 2019, there were several weeks of featured reports in major media about protests in the Soura district in Srinagar & how residents were barricading the area to make it a no-go zone for Indian troops. The protesters became a symbol of fearless resistance to the lockdown at a time when there was so little other news. When all news stopped, sometime in September, up until today, we have heard no more reports from Soura.

Kashmiri journalist Haseeb Ibn Hameed tweeted today that he took this photo in the Anchar area of Soura on September 13th, 2019 & submitted it to his newspaper. He gave no other context for the photo. His editor & other dailies he asked refused to publish it fearing sanctions by the Indian government. He published it for the first time today on Twitter saying: “Anchar would be remembered for their bravery & unity.”

Can any Kashmiris tell us what happened to those remarkable protesters of Soura? Have there been arrests or violence against them? Did the Indian Army manage to force their way past the barricades? 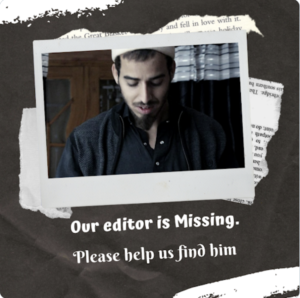 The Committee to Protect Journalists are campaigning for Kashmiri journalist Qazi Shibli (Qamar Zaman Qauzi) who was arrested July 25, 2019 after he tweeted about the deployment of thousands of Indian paramilitary troops to Kashmir. He is the editor of the news website The Kashmiriyat.

For those who speculate, without a shred of proof, that coronavirus was manufactured in a CIA or Mossad lab: it’s far more likely, from what we know, that it originated with the disrespectful treatment of animals. Chickens coming home to roost, in the full sense of that metaphor. Not that the CIA isn’t capable of such treachery, or worse, but that you can’t throw around such charges every time something terrible happens. Because, if the problem is rooted in something else, like the mistreatment of animals, we need to know that. Paranoia & conspiracy thinking do not serve humanity.