Speaking of fake news, it turns out the NY Times Jerusalem correspondent David Halbfinger completely invented the story about that handful of “Arab thinkers” who oppose BDS & want to collaborate with Israel rather than stand with Palestinians to oppose colonialism, occupation, apartheid, genocide.

It’s intellectually undeveloped to take this kind of deceit & decide to stop reading media unless it’s ‘alternative’. One has to read a wide range of world media to be informed of prevailing views, of government actions, of events. But there is a caveat in reading all media: vet & double-check their sources.

Israel’s ambassador to Burma tweeted Suu Kyi & the generals ‘good luck’ in their upcoming trial for the Rohingya genocide at the International Court of Justice in the Netherlands. It was such a reckless & monstrous diplomatic blunder that for the first time the Israeli Foreign Ministry denounced ‘atrocities’ committed against the Rohingya. It did not explain or apologize for selling arms to Burma during the genocide or report if the arms trade with Burma continues. Israel continues to arm India against Kashmiris. Oh what a tangled web Zionists weave when they practice to deceive about genocide.

In a hard-hitting interview with Beijing propagandist Victor Gao, Mehdi Hasan asked Gao about the torture of Uyghur Muslims, including pulling their fingernails out, electrocution, forced sterilization. In eight minutes of interview, Gao did not respond to a single allegation made by Uyghurs in exile but repeated the word terrorism 25 times at the rate of every 15 seconds. Gao cannot do for China what Goebbels couldn’t do for Nazi Germany or Modi for India: make fascistic control look like democracy no matter how many times you say ‘terrorism’.

Trump just put his son-in-law & senior advisor Jared Kushner in charge of constructing the US border wall with Mexico. We need to be careful about over-personalizing Trump’s political decisions since he administers the government of an immense capitalist system with considerable economic, social, & political interests at stake. He will not be allowed to completely bungle those interests by involving his halfwit relatives. Although as a con artist he will find enriching himself along the way & playing to his rightwing peanut gallery to be irresistible, his decisions should be seen primarily as reflecting the political perspectives of US capitalism.

There is a definite logic to putting Kushner in charge of the border wall since after Kushner’s involvement in the conflict of Israel with Palestinians there has been an acceleration of land expropriations in the West Bank, including US sanctioning of Israeli settlements on expropriated Palestinian lands in violation of international law. One of Kushner’s chief jobs as project manager on the border wall will be to pressure US Customs & Border Protection & the US Army Corps of Engineers to fast track the expropriation of private lands needed to build 450 miles of wall by the end of 2020. According to the Washington Post, ‘more than 800 filings to seize private property will need to be made in the coming months if the government is going to succeed’. That private property includes farms & ranches along the river, nature habitats, & Native American lands, including sacred ground. Native American tribes will be facing exactly what Palestinians do since it is all part of colonialism & ethnic cleansing.

No border wall! Open the damn borders. No human being is alien to us. 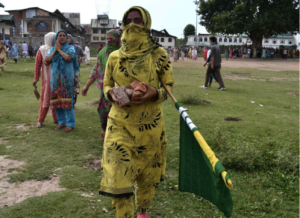 A young woman, one of the notorious stone pelters of Kashmir, is also carrying a Kashmiri flag during a protest in the suburbs of Srinagar against the occupation. Indian propagandists portray stone pelters as antisocial & criminal elements but as we know from Palestine & Kashmir, they function more as civilian defense guards for unarmed protesters. When you’re facing genocide, when your children are being shot at by snipers with pellet guns & live ammo, you have a right to defend yourself by any means necessary.

This photo appeared in a recent TRT World article by the photographer but it is not certain when exactly it was taken.

Chad Wolf, the new acting director of US Homeland Security, appears to be more a ‘man on the make’ than a rightwing ideologue which suggests he is a man without even a deranged moral conscience. He supported the Muslim ban & was directly involved in formulating Trump’s family separation policy responsible for kidnapping 70,000 refugee children from their parents. Thousands of them have been lost, most likely to traffickers. Wolf was caught lying under oath about his role in the policy, not because he felt any shame for being an amoral dirtball but in order to be confirmed for a position with Homeland Security.

In an interview with Fox News, Wolf pledged to go after the cartels & transnational criminal organizations that traffic weapons, drugs, women & children across the southern border. But that will put him at odds with US government agencies involved with the trafficking so his tenure with Homeland Security may be brief. 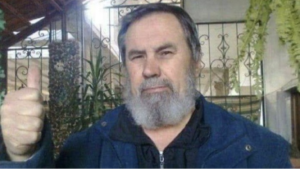 Osama Omar al Khaled died on Monday at the age of 64 in a Damascus hospital as a result of torture & medical negligence in Assad’s gulag. He was a Palestinian Syrian doctor who since 2011 played a prominent role in the Syrian Arab Spring especially by providing medical services to injured protesters. He was nicknamed the ‘doctor of orphans’ perhaps because he accepted no money from those in need. He was resident in the western suburbs of Daraa. Assad intelligence services arrested him in August 2018 while tending to the sick in a refugee camp in the area. He died as a result of the torture administered in prison & medical negligence in treating him.

May Osama Omar al Khaled Rest In Peace. We should take a moment to honor him & all medical personnel in Syria, including the White Helmets, who administer care even while Syrian & Russian war planes have destroyed every hospital in Idlib, specifically targeting medical & rescue workers.

This is a deeply disturbing article about the death yesterday of Palestinian political prisoner Sami Abu Diyak in an Israeli prison showing how medical negligence for political prisoners is systematic Israeli policy. It’s what is called a gulag for Palestinians. You cannot reform a system that uses torture & refuses medical care to the sick. May Sami Abu Diyak Rest In Peace.

The Hindustan Times reported today that Twitter is going to purge thousands of accounts which have been dormant for more than six months. It will send emails to dormant account holders asking them to sign in before December 11th to keep their accounts active. They did not announce exceptions for Kashmiris who are unable to receive emails but who India anyway plans on barring from social media. It isn’t conspiracy mongering to question if there is some collaboration going on.

This article is as much about women’s active role in resistance to occupation as it is about the suffering caused by seeing their children injured, kidnapped, tortured, jailed in India’s hell hole prisons. It includes some outstanding photojournalism of women protesters.