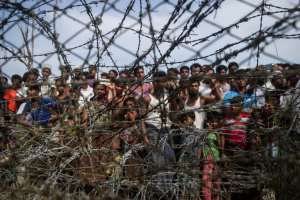 These Rohingya refugees are in the no man’s land border zone between Burma & Bangladesh. It’s a 40-acre (16.2 hectare) buffer zone along the border with a razor wire fence on the Burma side & a creek on the other. Between 6,000 & 10,000 people have been living there in makeshift tents since August 2017 when they fled genocide in Arakan/Rakhine state. In January, Burma & Bangladesh worked out a deportation deal to return thousands of Rohingya to barrack housing in concentration camps since the military has commandeered or razed most of their lands & villages. The Rohingya will have nothing to do with that scheme which would only provide Burmese genocidaires a chance to finish their genocidal onslaught. Reportedly, only one family has agreed to go back. Burma has increased troop numbers on their side of no man’s land in an attempt to intimidate the refugees & accuse ARSA of having infiltrated the camps. One can only hope ARSA militants got out of Arakan alive.

One would think in such a vulnerable situation that Rohingya refugees would be cowed. But despite the military show of force & the coming monsoon season, a camp spokesperson named Dil Mohamed told reporters that they would not be intimidated into returning to concentration camps in Burma & refused to move forward to refugee camps in Bangladesh. “We have no intention to enter Bangladesh. We are not Bengali, we are Myanmar original citizens,” Mohamed told reporters. He said they would return to Burma only if they were guaranteed safety, compensation for the homes torched by the military, & with permission to resettle in their old villages. They would not accept the concentration camps.

This leaves the deportation plan in utter disarray, where it belongs. Decisions about the fate of the Rohingya is for them to decide, not for Burmese genocidaires & the Bangladeshi government.